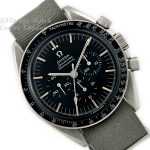 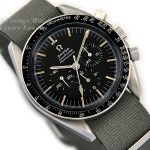 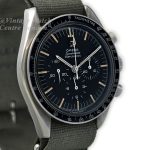 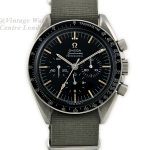 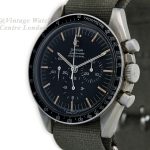 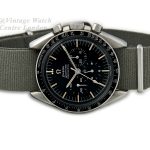 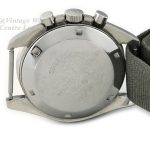 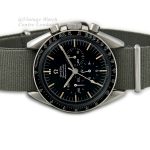 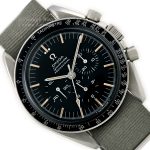 The example here is from 1968 the year before the first manned moon landing in 1969 and so it is known as a pre-moon landing watch. It is therefore far more valuable for this and does not carry a moon watch case back.

The main model Omega Speedmaster dial has remained pretty much unchanged since the first watch went into space 60 years ago. Such is the dial you see here, born for functionality, legibility, and nothing else. It is completely original unrestored and untouched and is in tip-top condition. The original lume is now turning into a nicely faded pale yellow brown, and the original hands are also totally original and perfect.

The Omega Cal. 321, derived from the Omega-Lemania 27 CHRO C12, which was a chronograph, with a 12-hour recorder, developed in 1942. The most famous variation of this caliber is, as you can guess, the caliber 321 chronograph movement.

Apart from being used on the moon, the caliber was used in the very first Speedmaster wristwatch, reference 2915. The caliber later joined Walter “Wally” Schirra’s, onboard Mercury-Atlas 8, in 1962.

Here the original Omega copper-toned Cal.321 movement looks pristine. It is in tip-top condition having been overhauled and serviced by our vintage chronograph specialist watchmaker. This means it has been completely disassembled to all its component parts, carefully inspected under high magnification, replacement where necessary with only genuine Omega parts before careful reassembly and adjustment and calibration. The watch winds, sets and runs perfectly accurately and reliably and at the time of testing, immediately following its service, the test results were within +3 seconds per day. This is truly outstanding for any watch of this age and has been confirmed on our electronic watch timegrapher. The movement also has an exceptional power reserve of 44 hours.

The movement is correctly signed ‘Omega Watch Co.’ ‘Seventeen 17 Jewels’, and carries the Calibre 321, along with the serial number xx,xxx,xxx which dates its manufacture to 1968.

Inside the case-back is signed ‘Omega Watch Co.’, ‘Fab Suisse’ and ‘Swiss Made’, along with the Omega reference number 145.012

The example here is from 1968 the year before the first manned moon landing in 1969 and so it is known as a pre-moon landing watch. It is therefore far more valuable for this and does not carry a ‘moon watch’ case back.

The watch is fitted with a vintage style light grey/green NATO Strap which we think suits the watch very well. However, if a different colour or style of strap is preferred, please let us know and we will do our best to oblige free of charge. We carry tan, conker, dark brown and black in stock, in plain padded leather, crocodile skin or lizard skin, but can also obtain most types and colours of strap from our partners at ‘Watch Obsession’ within 48hrs.

Although there are no original papers with this watch, the reference numbers, markings, signatures and hallmarks are all correct, dating this watch to 1968.

An exceptionally fine example of the iconic Omega Speedmaster from 1968. Omega watches are highly collectable and respected, therefore its most famous vintage models like the Speedmaster, are sure to climb in value.